Weeding Out The Troublemakers: the Threat of Japanese Knotweed 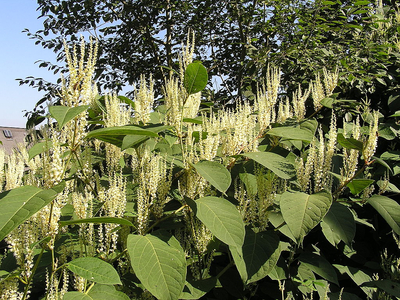 You may be familiar with Audrey 2, the man eating plant in the 1960s show Little Shop of Horrors, but dangerous and destructive plants are more than just amusing fiction. There was nothing amusing for the Hertfordshire couple who watched their £300,000 new home be pulled down because of a japanese knotweed infestation.

Japanese Knotweed is a plant first brought to the UK in 1886 as an ornamental plant due to its impressive bamboo like stems and large green leaves. It was popular for screening railway embankments. With a lack of natural predators and a beneficial climate it spread rapidly. It can now be found all across the UK and is forcing its way into our homes and gardens.

It can grow up to 4in a day and as its tendrils spread horizontally underground they can bring down walls, erode foundations and break up paving, drains and driveways. It costs around £150Million a year to control throughout the UK. It cost £70Million to clear it from the London 2012 Olympics site alone.

In 2011 a Hertfordshire couple bought a new home on a small development.  Unknown to them this invasive nuisance was growing over the fence on land next door. Their home dropped from £305,000 to £50,000 almost immediately. Unable to treat and destroy the knotweed they eventually had to have their house pulled down. Their insurance did not compensate them.

More extreme is the case of a man who became so disturbed by the knotweed affecting his home that he became unstable and eventually beat his wife to death with a perfume bottle!

Locally it was found in 2013 near a proposed new supermarket at station road in Cottingham and recently, in September 2014, it was spotted around the Avenues and Spring Bank in Hull.

Legally, it is classed as a controlled waste, and can only be disposed of in special landfill sites, not in your brown bin. If you simply throw it in the bin you are committing a criminal offence in allowing it to spread. You throw it in the bin at your peril!

Because of the legislation involving its destruction, specialist firms are required to deal with it. They often charge at least £300 a visit, and two visits a year over three years are usually needed. If knotweed is found in your garden, the bill will almost certainly hit £1,500; it could be considerably more. If you let it escape into your neighbour’s garden then they could sue you for their costs and charges

If you have knotweed in a garden then you may find it hard to sell your property. Some mortgage companies will refuse to lend whilst others will hold back many thousands of pounds of your mortgage until it is dealt with. This could take several years.